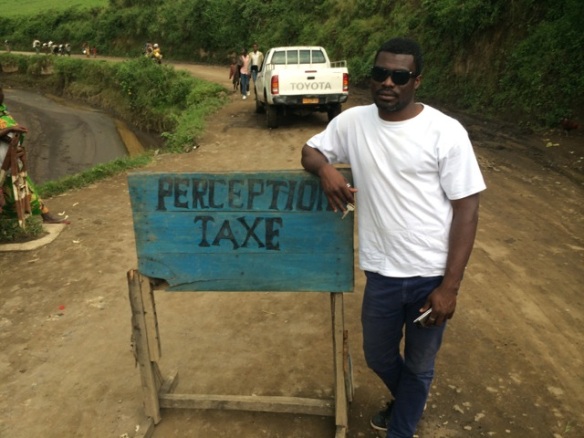 The Congolese state, from its colonial origins through the Mobuto dictatorship to Kabila’s regime, has widely been described as „exploitative“ and „predatory“ (e.g. here). In practice, this means that power is used arbitrarily and abusively to squeeze resources out of common people. As an expat working for an international organization you miss most of that. Your special status and the bubble you live in safely shield you from being confronted with such inconvenience. You don’t pay any of the creative “taxes” and quickly pass, for example, the checkpoints which are used to extract money form the population. Seeing these things through the lens of the legal-rational (Weberian) state, you come to think of them as normal regulatory and security measures.

During recent fieldwork in the Congolese countryside, however, I was able to catch a glimpse of reality. Without the “carte de service” that identified me as belonging to a powerful international organization, all kinds of semi-officials and authorities laid claim on my freedoms and ultimately my money. Roadblocks became real obstructions and in every location, I had to register with the administration, the immigration service (DGM), the security forces (FARDC & PNC) and the intelligence service (ANR). Such situations represent ample opportunities for establishing “infractions” and subsequent demands. The difference to normal Congolese people is that I remain privileged and never really feel vulnerable. I am aware of my special status, which protects me from abuses, and increasingly use it in negotiations. As a consequence, these situations are more annoyances – costing me time, energy and money – than they are threats. However, by the behavior of those “agents”, you get an idea of what it would be like to have no power at all and be completely at the mercy of such agents. This is probably an exaggeration as ordinary citizens have agency and negotiations always take place, but it leaves me wondering, if experiencing such a sporadic glimpse of reality is necessary to understand governance and coping strategies. Timothy Raeymaekers writes in this regard that “one should always remain aware of the often intricate ways in which daily attempts to avoid risks, increase predictability, and make a living profoundly inform political rule systems” (2015, P.151). It follows that such an understanding might be needed to successfully work on any kind of reform in this country. If that’s true, could such experiences be made part of a cheap and effective introductory course for new arrivals?